a failed terrorist in Oslo 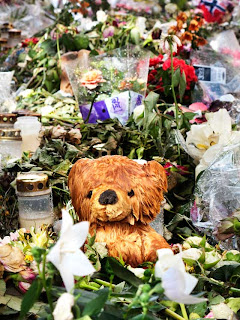 A bit more than a week has passed, since Oslo, Norway and the world was struck by the horrific actions of one single man. I will just call him a mass murderer, he does not deserve to have his name or face on display. I have received greetings, questions and concern from friends all over the world, and want to write this as a thanks and a reply. It seems that the fact that peaceful Norway was hit by a mass murderer, has made the impact greater than if it had happened elsewhere. My little land - "Mitt Lille Land" - has been a safe haven for democracy and peace, welfare and dialog. More than we realized, nations have looked at us as the innocent and pure, not contaminated by evil. Killing our youngsters was like raping the last virgin.

I was in Denmark when the bombing and shooting took place. The worst thing that can happen on a journey, is what happens at home. Denmark was not the right place to be, but at least I spent it among family, which made good sense. We were all struck by a feeling of emptiness, when the dreadful truth dawned on us. In a strange coincidence I was attending a concert by the famed Danish artist Kim Larsen on the Friday it happende. His song "Kringsat av fiender" is a version of a Norwegian song "Til Ungdommen" (To The Youth). It is about peace, and has grown to be a consoling hymn after the tragedy.

The mass murderer had planned this for nine years, and was truly unlucky in fulfilling the plot. In my eyes he is the biggest looser possible. For one thing, he got caught in traffic jams, so many had left their office before the bomb set off, and his main target had left the island before he reached it, but his biggest failure was to underestimate Norwegians. A young girl wrote "If one single man can create so much evil, imagine how much love all of us can create." This wraps it up, and thas is exactly what happened. Except for some pitiful individual's bullying of immigrants before it was made clear that the mass murderer was a blue eyed Norwegian, we have reacted with passionate love. Muslims and Christians and the rest of us have all felt alike, side by side shedding our tears.

Last Monday, 200 000 people gathered in Oslo, and tens of thousands in other cities and places. They all raised their fists together, and in each fist was a flower. Oslo was covered in a sea of roses, and in a central square an ocean of candles and flowers have kept growing ever since. The political parties have lots of new members, new voters will take part in the upcoming elections and the contact and sympathy between ethnic Norwegians and more recent citizens have improved. This shows how big a looser the mass murderer is. He did not scare us, but he made us show the world that we are not a cold and distant people, but a people of love and empathy, coming together to take a stand for what we are proud of. Freedom. Democracy. Equality. And we need it. We need the reminder and we need to be tested. The price was much to high, but what we owe the dead, is to honor them by living up to the speeches given, the poems sung and the hugs shared.

A hope is growing that the mass murderer actually did succeed in what he wanted accomplish, as his intent was to change Norway. This he probably did, although not in the way he had in mind. Rather the contrary. He changed us for the better.

Will this week remain standing as a lasting example, showing how the effect of evil violence can be conquered with love? It is up to each and one of us to live up to the slogan OSLOVE. I asked my nephew Kasper. He is a wise six year old: "We must be kind and good to each other" he said. That was his advice. Is it really that hard?