The Faroe Islands have an extremely rich musical culture. The local shop in Thorshavn is a good place to start. Here I met Kristian Blak, who runs the record company with the same name as the shop, Tutl. It means the trickling sound of water in Faroe Language. Like the most tender sound of nature.
These natural sounds are the sources of inspiration for Kristian when he compose. This guy is much like the hub in the musical life on the islands, a world traveller, singer, band organiser. Yggdrasil and Spelemennene are two of his groups. He simply lives for music - and he is a wonderful person to get to know. I will cut it short, and leave it to this weeks episode to show what a peculiar fellow I was fortunate to befriend.

As if Kristian was not nice enough in himself, the event Sommartonleikar brought me in touch with more musicians, that went on a tour to the most insane places for concerts, hardly inhabited. The musicians outnumbered the audience, even with a stunning 80% of the locals attending. There were local contributors as well as foreign, and I especially fell in love with the mainly Danish choir "Vokalselskabet GLAS".

This choir is totally awesome, and Birgir Enni, captain of Norðlýsið took us to the caves and bird mountains of Hestur, where we made this rough, but I think beautiful video:

Aren't they just something? And then one sunny day, a big black Irish boat, the  Galway Hooker" Mac Duach" came into port, with four beardy Irishmen that were in sorrow. A good friend of theirs had drowned back in Ireland the very same day. We decided to cheer them up, and got a night I will never forget. The ships hull was loaded with music and joy, in respect for their pal and of life. It went on and on and on ... bulgarian folk songs, the Beatles, Irish fiddle ... anything you could mention, Kristian, the girls or the Irish just performed. I have to admit I love this Bulgarian wedding song, you you decide the place you prefer, at sea under thousands of birds or in the old Irish boat. I must excuse the raw look, it is simply filmed with my pocket camera. 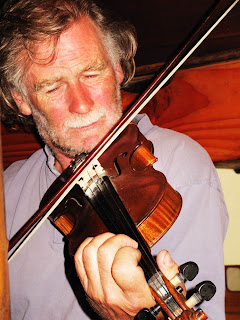 Like some kind of universal jukebox. What a night! Thank you all!