One day in Cairo

This has been one of my best days in a while. It started last night, with eating home-cooked pigeon on the floor in the home of my dear friends in the old part of Cairo. Maghdy and his family repeated the treat I got (and filmed - see the programme and read about the family) about eight years back. I have seen them since and keep in frequent touch, especially with Esraa, their youngest daughter. If you have my last book, they appear there. I was so glad to see that they are doing good, in spite of the hard times Egypt still struggle with.

As dinners here tend to stretch well beyond midnight, mornings are slow. I planned to visit the City of The Dead, but got a call from a couch surfer I had contacted. She invited me to Zamalek, the island in the Nile, for tea and a chat. The girl did not wear a higab (headscarf), so her giant curly hear (who would need a HUGE higab to be concealed) where flying in all directions. She lives in the better part of Cario, and has never seen the neighbourhoods I frequent, so I volunteered to be her guide later (read about Old Cairo). That will be interesting.

The taxis here are an adventure, and I believed something was wrong with mine, as it did not rush forward at any given opportunity. Suddenly I realised that the driver occasionally let competing cars pass him, where the street obviously were to narrow for two cars. He used what in Norway is called the "zipper-prinsiple", meaning the first car goes first, and you give way peacefully. You rarely see that here, and he was very pleased that I complimented this behaviour. Here is my previous experience of Taxi in Egypt.

I had to kind of rush from my first appointment to the next, with another wonderful woman born and bread here. We were soon joined by a female friend of hers, this time in downtown Cairo. They both prefer to cover their hair, and as practically all women I talk with here, I got the stories about why they are not married, why they do not trust men and why they are kind of desperate to let go and live in a more liberal community.
These two are from families that are somewhat less liberal than my first appointment, but dress like many modern women in Cairo, in tight western clothing, except for the hijab. If a man stick a paper note in their hand, it can be one out of two. Either his phone number or a quote from the Quran, advising them to dress more properly. All women here have stories of harassment, they get nowhere if they complain to the police about such incidents and they often need to use connections to get things done that is not "fit" for a woman. Like getting a license to drive a motorbike.

I had to rush again, for my third appointment. This time the taxi driver was an older man, who hesitated a bit when I jumped into his front seat. I checked his meter (the white taxis have meters now!) and started arguing at once, as it did not start at 3 pounds at it should. I kept on bitching about this, until he pointed behind me, where another passenger already had a couple of blocks to go. All three of us burst out laughing.

Again heading for Zamalek, a car in front of us were utterly slow (for being in Cairo) so I put my head in my hands and made snoring sounds, which made my dear driver laugh so hard I was worried he would completely loose control of the car. His laugh changed into a terrible cough, bringing up age old nicotine from his suffering lungs, that had to be spit out the window, again endangering our safety. He looked at me and with a body language that was easy to interpret, made it clear that I was his most entertaining passenger in a while.


We got there well before Caroline, the belly dancer that is also pictured in my book. She is Australian, loves Egypt and teaches and dances both here and abroad. It was lovely to meet again, and enjoy what most probably will be my only beer in these three weeks. She experience another side of Egyptian life that all others I know, both running a shelter for animals in need and doing her touring and teaching.

It was getting late, and tomorrow will be a busy day, so I headed "home" to Hotel Hussein. I have to walk around the local alleys to see if something is going on, and settled in one of the cafes for a tea, after grabbing the waiter and waltzing around with him. Our performance was applauded by all the shop workers around us, and he gave me a nice seat in a group of men (of course).
So, here follows the explanation why I contact women (I have written about Women in Egypt here and Men in Egypt as well). At least part of it. Women have a complete different version of life and culture than males, in this country. And getting in touch with men is easy-piecy. They love to talk. I can not, however, sit down in a group of women, at least not in this, more traditional part of town. The waiter would normally tell me to sit at another table. The trick is therefore to contact interesting women on Couch Surfing and ask them if they would lie to meet. Three out of five said yes, and they are simply great. Next step is to bring them to my cafes, in order to provoke a slight little bit. It is especially confusing to the guys here if my friend is wearing a higab. I just love that. 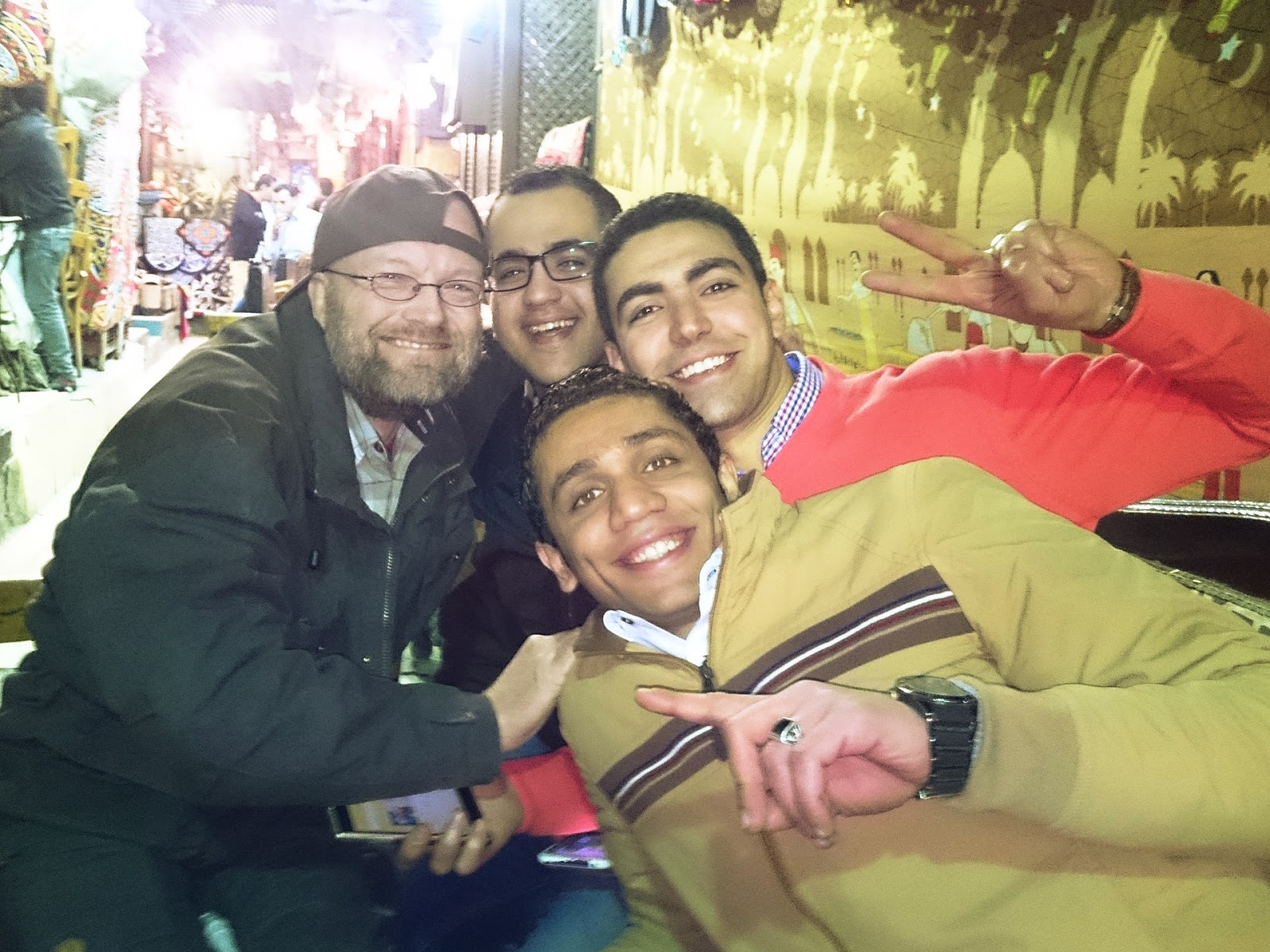 But, back to the four guys sitting at my table. Really nice guys. One speaking English well, the others not so much. Again, the conversation goes from sexual harassment, bodily needs, politics, caricature drawings to practice of Islam. Super interesting. They are polite, fun, honest and direct, and totally confirm ALL the problems and difficulties my female friends have shared with me earlier today.
We laugh, we drink tea, I smoke sheeshaa (water pipe) and tell them exactly what I think is wrong with the way I do things. At the same time I understand their side, I understand which standards they live up to and I understand their political views. Typically, the most educated of them is against the present president Sisi, while two of the non English speaking loves him and the third, with a big smile, says "No comment".
While we sit there, they are constantly approached by vendors of all kinds. As a tourist in Egypt, you must not believe that these touts are targeting tourists more than Egyptians. It is like a theatre of offers and rejections, bakshees (tips) and haggling. One boy is simply totally amazing, trying to sell some plastic propellers with coloured lights on them. Awesome salesman at the age of six.

It is way passed my bedtime when the guys leave. One of the street vendors, and older woman that I know from previous visits, sits down with me. She has had a good day, with no more flowers to sell. Her English is a bit better than two years ago. One colleague of hers ask if I want to buy paper tissues for a pound. I can't find any coins in my pocket, so I refuse. She gives me the tissues for free, and says I can pay to Allah later (if I understood it right). Then this wrinkled old woman ask if I need money, and try to give me five pounds! You have to love people like this, even if it is a joke. Of course I reject.

I ask them if they know Shadia, a girl I photographed eight years ago. She was selling head decoration of perls here in the bazaar. They know her, and the flower woman takes me out in the square and looks for her. After a few minutes she appear, totally beautiful, with great dimples and a wonderful smile when she see the big photo of herself in the book I have with me. I will definitely give the book to her later in my stay here.

So that is it. The flower woman has asked nothing of me, but a woman with scars after burns in her face, that has no husband but a kid on her shoulder, ask me for money. I ask my flower woman if this beggar is a good person worth giving too, so I give her a five pound note. That is actually too much, almost one Euro, but she is the only one today. The flower woman is just being helpful, not asking me anything, just being kind. I sure will buy roses from her one of these days, hopefully for one of my friends, when I bring them to this part of the city, that they know so little about.

Tomorrow is Esraas day, we will go to a fun fair and meet up with one other friend later. Esraa is smart and already speak well English, so I will introduce her to my modern friends, hoping she will be encouraged. Two years ago, we went to the pyramids together. She was fourteen, and that was her dream, as she had never been there. Read about that here.

Just forgot I lack a cable to connect my main camera, so you will have to do with these superqualtiy mobile-phone shots for now … :)


Have a look at my links to former blogposts, keep your mind open and be sure to come and have a look for yourself!